DON’T GET YOUR MEDICAL MARIJUANA CARD UNTIL YOU READ THIS!

We want to pay homage to one of our own local football legends, EUGENE MONROE, who donated $80k towards Medical Marijuana Research! As a player for the Baltimore Ravens,  Eugene Monroe – offensive tackle – has been an advocate for allowing NFL players to use medical marijuana for a long time. It has been a bit of a debate in recent years given the number of concussions and injuries that occur on the field. 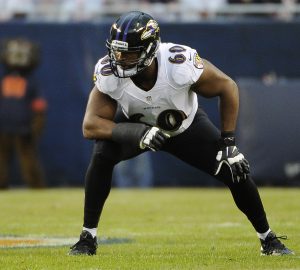 CHICAGO, IL – NOVEMBER 17: Eugene Monroe #60 of the Baltimore Ravens plays against the Chicago Bears on November 17, 2013 at Soldier Field in Chicago, Illinois.

Monroe says: “As a player I’m not allowed to use cannabis, but I’ve been prescribed opioids for various injuries,” Monroe said on Thursday. “The opioids work, but they’re very dangerous and highly addictive.”

“On March 9, 2016, I became the first active NFL player to openly advocate for the use of cannabinoids to treat chronic pain and sports-related injuries. It’s time for the NFL to change its archaic standards to better protect its players and set an example for our young athletes (high school athletes are more commonly using drugs than their peers and football players are most likely to use drugs). For too long, I’ve watched my teammates and good friends battle with opioid addiction and leave the game with a long road still ahead; it’s time to make a change.”